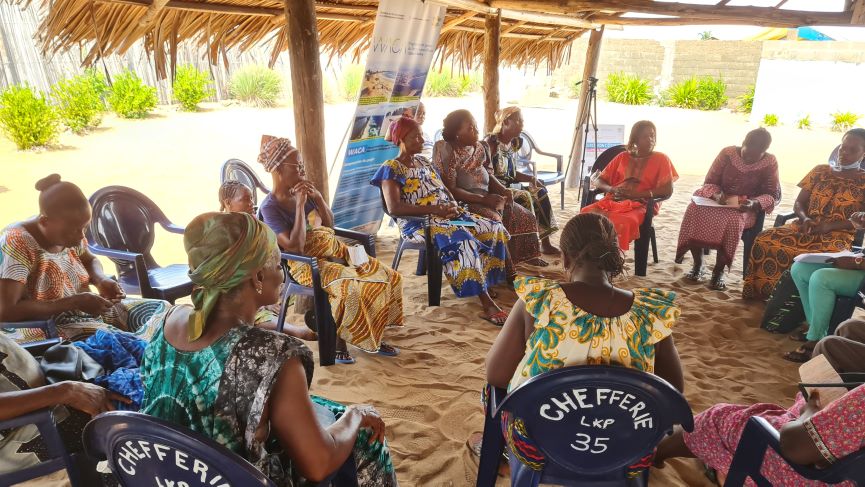 Women of Grand Lahou, Cote d’Ivoire, brainstorm on how to collaborate with WACA.

Heavily impacted by climate change, the displacement of river mouths and the disappearance of marine and plant biodiversity, coastal communities are faced with numerous economic and social difficulties.

Women are among the most affected: their purchasing power has been considerably reduced by the lack of income-generating activities; they can no longer smoke or sell fish, practice salt extraction, produce attiéké, etc.

The WACA project in Côte d'Ivoire has chosen Grand-Lahou as a pilot town to address the problem of coastal erosion . Activities include stabilization of the sandy barrier, creation of income-generating activities, reforestation of mangroves, and creation of wood yards.

To encourage more committed and dynamic participation by women and to strengthen their power to act, three women's networks were created in December 2021 in the communes of Braffedon, Grand-Lahou and Lahou-Kpanda.The women welcomed this initiative. According to Ms. Segui from Grand-Lahou, "Creating a women's network will allow them to have a better knowledge of the project, get more involved in project activities, and improve the living conditions of their families.”

The women of Braffedon, a village located 15 km from the city, chose the name Etchrin, which means "Let's encourage each other"; those of the village of Lahou-Kpanda, which is located between the lagoon and the coast, chose the name Wadouhi, which means "Let's do it", to mark their commitment to participate and contribute to the success of the project. The implementation of these networks will be extended in the coming months to the villages of Groguida and Liklassie,  in Grand-Lahou and to other areas such as Assinie, Bassa, Jacqueville, Port-Bouet, San Pedro.