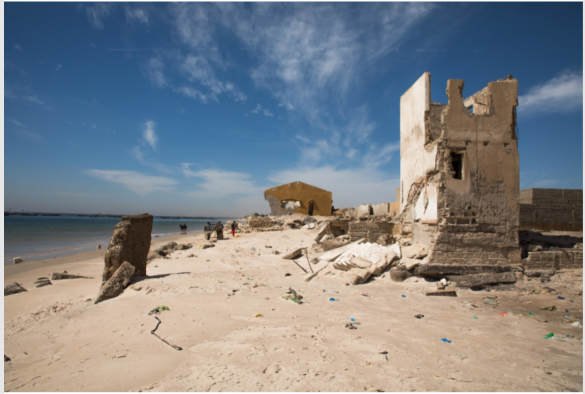 Ahmed ould Bilal grew up in Iwik, a small coastal village in Mauritania populated by the Imragen, a tribe known for their history of fishing with the help of dolphins. The peninsula on which Iwik is located is part of the Banc d'Arguin National Park, a World Heritage Site critical for biodiversity and threatened by climate change.

“For us Imragen, fishing is our life, it is the only thing we know,” says Bilal. “The last years have been a struggle for my people. We catch fewer and smaller fish; and most of our coast and our homes were swallowed by the sea”.

From Mauritania to Nigeria, West Africa is a hotspot of climate change; despite the imminent threats this poses to the region, the potential physical and economic impacts of climate change on the coastal zones have not yet been assessed. To address this gap, the World Bank commissioned a study titled Effects of Climate Change on Coastal Erosion and Flooding focusing on five coastal countries: Benin, Côte d'Ivoire, Mauritania, Senegal, and Togo, funded by the Nordic Development Fund (NDF) and the Korea-World Bank Partnership Facility (KWPF).

“West Africa’s coast is already at a tipping point and the new risks brought by climate change can be catastrophic for coastal communities, their health, and their livelihoods” says Maria Sarraf, Practice Manager, World Bank. “This study brings us a step closer to providing decisionmakers with tangible information to support long term sustainability.”

The study examines how climate change will affect coastal areas and identifies areas most exposed to climate change hazards. The impacts are already happening. West Africa’s coastline is exposed to a variety of natural and potentially damaging events. Three main factors contribute to the degradation of the coast in the region: erosion, flooding, and pollution, mainly triggered by poorly designed infrastructure and inadequate management of their environmental impacts. Sand mining and loss of natural habitat, such as mangroves, have also exacerbated the degradation.

According to the study, if global emissions continue on the current path, temperatures could increase by +2°C in 2050 and by +4°C in 2100 – with temperatures in winter months expected to increase more than during the summer months.

Similarly, the study shows that the total annual rainfall could decrease, even as extreme events increase the risks for floods.

By the end of the century, all five countries in the region could experience a rise in sea level of more than one meter.  Mauritania and Senegal are likely to see an increase of 0.6 meter by 2050, followed by Benin, Cote d’Ivoire, and Togo with 0.3 meter.

With numbers like these, it is essential that governments prepare for an uncertain future, with room for flexibility and iterative adaptive measures. There is scientific consensus that precipitation patterns will continue to vary, and that sea level will rise – even if the exact level of change is unknown.  With the projected sea level rise, over 5, 500 km2 by 2050 and 6,650 km2 by 2100 will be flooded in the five countries in the study. As population increases and coastal cities grow, recommendations from this study will inform critical coastal zone planning.

As sea level rises   and natural defenses crumble, the coast is at risk of permanent inundation. Repetitive drought worsened by climate change have already forced rural communities to settle on the coast, increasing pressure in this already fragile ecosystem. Population settlements, aquatic resources, crop productivity, and biological diversity will continue to be impacted if no action is taken.

The study provides a snapshot of the severity of these impacts and recommends resilience measures. For example, an assessment of sea level rise and the effects of tides, will guide the types of breakwaters to be designed to protect the coast.  It highlights the severe lack of sea level rise and precipitation data in all five countries, prompting future investments in the region to include generate such data.The results have been used to validate the coastal exposure to climate change hazards to make a strong case for climate financing and to inform the overall design of investments such as groynes, drainage systems and natural resource management.

“The scientific consensus is clear. Climate change impact will lead to irreversible loss of coastal and biodiversity and marine ecosystems and will deeply impact communities,” said Junu Shrestha, task leader for the study and Senior Environmental Specialist for The World Bank. “We know that flooding and erosion are worsening—and we can now estimate the immense consequences coastal communities will face.”

The study finds that major coastal cities like Abidjan, Cotonou, Lomé, and Nouakchott are likely to be highly impacted by erosion, with urban areas in Mauritania being particularly exposed. But the challenge is of course not only urban: major national parks in Mauritania, like Diawling and Banc d’Arguin will be also significantly affected.

Another study focusing on Africa fisheries, suggests that climate change will have a significant impact on Africa’s marine fisheries, as early as 2050 affecting food security and revenues of those dependent on the resources for their livelihoods.

To address challenges like these and to improve coastal resilience in the region, the World Bank and partners established the West Africa Coastal Areas Management Program (WACA) with the ambition to mobilize US$ 2 billion for coastal resilience. The Program brings together coastal countries and partners to customize solutions, accelerate mobilization of expertise, and facilitate access to financial instruments to improve coastal livelihoods for people like Ahmed ould Bilal and the Iwik community.

“As the sea level rises, so does the likelihood that the success of these burgeoning regions will be washed away as food production will decrease, access to clean water will be curtailed, and catastrophic storms will become more prevalent…”says Ahmadou Aly Mbaye, Senior Fellow,  Africa Growth Initiative.

Acknowledgement: The World Bank would like to thank the Nordic Development Fund and the Korea-World Bank Partnership Facility for sponsoring the analyses in this report and the related feasibility studies leading to actionable investments.